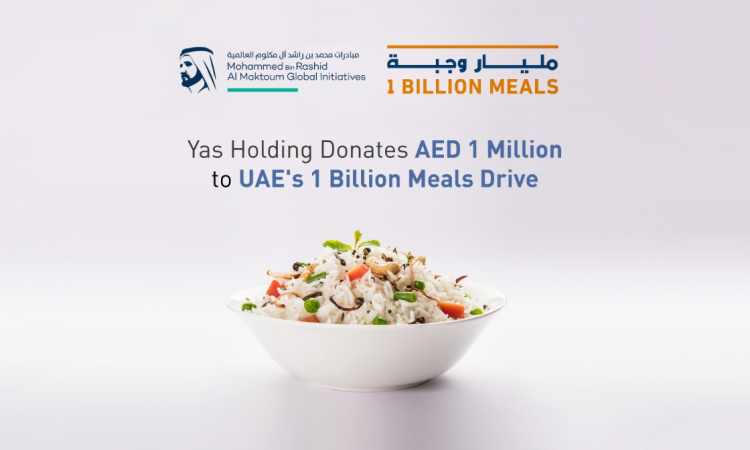 Yas Holding has announced a donation of AED 1 million to support the humanitarian efforts of the UAE, the region’s largest campaign of its kind to provide food support to the underprivileged and undernourished in less fortunate communities across 50 countries.

Our donation, equivalent to one million meals, is a significant addition to the donations of other benefactors to the initiative, which has tallied 551 million meals within just 20 days of its launch by His Highness Sheikh Mohammed bin Rashid Al Maktoum, Vice President and Prime Minister of the UAE and Ruler of Dubai.

Our Group CEO, Mr. Murshed Al Redaini, said: “We are honoured to contribute to this noble humanitarian initiative during the blessed month of Ramadan, helping to reduce global hunger and malnutrition in underprivileged communities across the world. We hope to demonstrate values of solidarity and human fraternity, reflective of this month of good deeds and giving. As a leading business development and investment company, Yas Holding aims to inspire growth in the UAE and beyond.”

The initiative was launched at the beginning of the Holy Month of Ramadan. It is a continuation of last year’s 100 Million Meals, which surpassed its target, collecting and distributing 220 million meals. In its efforts to provide food aid to those in need, the initiative contributes to the United Nations’ Sustainability Development Goals, especially to achieve ‘zero hunger’ by 2030.